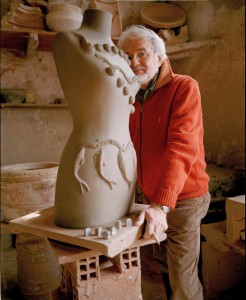 Giuliano Ghelli, born in Florence in 1944, was an artist as enchanted with symbols, memory, and color as he was with the Tuscan landscape in which, by choice and chance in equal measure, he lived his entire life.

At age 17 and with no formal art training, Ghelli began to frequent the avant garde Numero gallery of Fiamma Vigo. The circle of artists and intellectuals he met there strongly influenced his approach to painting. Ten years later, the patronage of art collector Marcello Secci enabled Ghelli to make art full-time.

In 1974 Ghelli produced his pocket volume Il Portapaesaggi with Lara-Vinca Masini, one of Italy’s most published writers on contemporary art. Of the canvases Ghelli showed in Paris that same year, Aldo Passoni, Director of Turin’s Galleria d’Arte Moderna praised “the language of pop, the intentionally rough, awkward line, the narrative dimension”. Ghelli began to be appreciated in Northern Europe and in 1975, after having shown three paintings at the X Quadriennale d’arte nazionale di Roma, he had his first of three solo shows in New York. Also in 1975 noted critic Tommaso Paloscia named Ghelli as of one of 50 top italian artists in the Catalogo Nazionale Bolaffi d’Arte Moderna.

In the 1980s a debilitating illness struck Ghelli’s wife Annamaria and limited his ability to work and exhibit his paintings. He divided his time between his studio and caring for his sick spouse at home. In 1989 he was cited by Lara-Vinca Masini in the second volume of Arte Contemporanea: La linea dell’Unicità, (her opus on late 20th century art) in the chapter Pop art in Europa. In this same decade a close friendship with the art collector Giulio Baruffaldi and the art photographer Stefano Giraldi broadened Ghelli’s contacts in cultural and business circles.

In 1990 Ghelli met the renowned Leonardo scholar Carlo Pedretti and became fascinated with the writings of Leonardo da Vinci, subject of a series of paintings shown at Milan’s Castello Sforzesco in 1992, and the following year in Malmö, Sweden. A few years later, in 1995, Ghelli completed his first major commission, again in a mechanical vein: twenty large canvases for the then new Rome headquarters of Mercedes-Benz.

In the aughts (2000-2009) Ghelli received other commissions of note including graphic designs for the waste management company Quadrifoglio, a ceramic mural for the public preschool “Mare delle Meraviglie” in Reggio Emilia, a series of painted tailors busts for the Camera Nazionale della Moda (given to recipients of the Milan Prize for Fashion in 2002, 2003 and 2004), a customized Fiat 500, exhibited in Tokyo in 2008 to coincide with the model’s launch in Japan, and the creation of the banner for the August 2009 edition of Siena’s Palio.

In 2003 Ghelli began work on his Esercito di Terracotta (Terracotta Army). Composed of over one hundred female busts (of which one is pictured above) and described by the artist as “an army of peace”, it gave rise to multiples in various materials and finishes, widely exhibited in subsequent years.

In 2013 a solo exhibition commemorating a full 50 years of work as an artist occupied an entire historic building: the Palazzo Panciatichi of Florence, whose sober walls were brightened by Ghelli’s colorful works for several months. That same year Ghelli was awarded the Gonfalone d’Argento by Tuscany’s Regional Council and the Onorificenza di Commendatore dell’Ordine al Merito della Repubblica Italiana by the President of the Italian Republic Giorgio Napolitano.